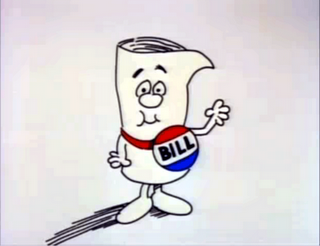 "I'm Just a Bill" is a song from America Rock. It teaches about legislature, the steps on how a bill becomes a law. It was written by Dave Frishberg and it first aired on March 27, 1976. It was sung by Jack Sheldon as the Bill with one of Sheldon's sons as the boy learning the process. The song was voted as second best on the 30th anniversary edition.

The song was sung by the Folk Implosion (as "Deluxx Folk Implosion") on the tribute album Schoolhouse Rock! Rocks, and it is on track 2.

Its music video, having the clip of the Bill being signed by the President between the clip of the Congress saying "Yes" many times and that of the President saying "No", was found on the end of the Grammar Rock tape. Also, it has clips from other America Rock episodes, such as "Elbow Room," "The Preamble," and "No More Kings." being one to contain clips from the most episodes.

This song teaches about the steps a bill takes to get made into a law, sung from the perspective of the bill itself, who sings a melancholy tune about being stuck in committee; the bill is signed into law at the end of the song.

Boy: Woof! You sure gotta climb a lot of steps to get to this Capitol Building here in Washington. But I wonder who that sad little scrap of paper is?

Boy: Gee, Bill, you certainly have a lot of patience and courage.

Bill: Well I got this far. When I started, I wasn't even a bill, I was just an idea. Some folks back home decided they wanted a law passed, so they called their local Congressman and he said, "You're right, there oughta be a law." Then he sat down and wrote me out and introduced me to Congress. And I became a bill, and I'll remain a bill until they decide to make me a law.

I'm just a bill. Yes I'm only a bill, And I got as far as Capitol Hill. Well, now I'm stuck in committee, and I'll sit here and wait while a few key Congressmen discuss and debate whether they should let me be a law. How I hope and pray that they will, but today I am still just a bill.

Boy: Listen to those congressmen arguing! Is all that discussion and debate about you?

Bill: Yeah, I'm one of the lucky ones. Most bills never even get this far. I hope they decide to report on me favorably, otherwise, I may die.

Bill: Yeah, die in committee. Oooh, but it looks like I'm gonna live! Now I go to the House of Representatives, and they vote on me!

Boy: If they vote yes, what happens?

Bill: Then I go to the Senate and the whole thing starts all over again!

I'm just a bill. Yes, I'm only a bill. And if they vote for me on Capitol Hill... Well, then I'm off to the White House where I'll wait in a line with a lot of other bills for the president to sign. And if he signs me, then I'll be a law. How I hope and pray that he will, but today I am still just a bill.

Boy: You mean even if the whole Congress says you should be a law, the president can still say no?

Bill: Yes, that's called a veto. If the President vetoes me, I have to go back to Congress and they vote on me again, and by that time you're so old...

Boy: By that time it's very unlikely that you'll become a law. It's not easy to become a law, is it?

But how I hope and I pray that I will, but today I am still just a bill.

Rep McCoy: He signed you, Bill! Now you're a law!

This song was spoofed in The Simpsons episode "The Day the Violence Died" as "An Amendment to Be" which was also sung by Jack Sheldon.

The Bill then had a cameo in the Family Guy episode "Mr. Griffin Goes to Washington" singing on the steps of Capitol Hill & gets stabbed & thrown away by a garbage man (also voiced by Jack Sheldon).

Retrieved from "https://schoolhouserock.fandom.com/wiki/I%27m_Just_a_Bill?oldid=5848"
Community content is available under CC-BY-SA unless otherwise noted.